The answer is a bit complicated. Depending on the types of evidence you found and the types of reasoning you used to make your decision, either word could be appropriate.

Let’s examine each word in a bit more detail.

What is the Difference Between Deduce and Induce?

In this post, I will compare deduce vs. induce. I will use each word in at least one example sentence, so you can see how it should appear in context.

Plus, I will show you a helpful memory tool that makes choosing either deduce or induce much easier.

When to Use Deduce 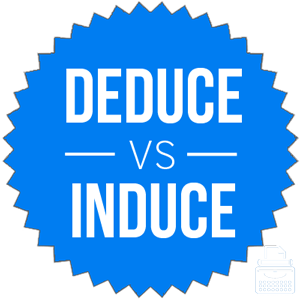 What does deduce mean? Deduce is a verb. It means to arrive at a conclusion through logic and reasoning. Its corresponding noun is deduction.

The fictional character Sherlock Holmes is famous for his power of deduction.

When to Use Induce

What does induce mean? Induce is also a verb. It means to cause or influence something or to infer.

Here is an example of the first sense,

When induce refers to a style of reasoning, it means to infer, or to arrive at a conclusion through a process of induction.

To grossly oversimplify, deductive reasoning takes broad, general truths and uses them to arrive at concrete, specific conclusions. Here is an example of a deductive syllogism:

The argument takes categorical truths about cats and a being called Rufus and uses them to draw a specific conclusion, namely, that Rufus sheds.

Here is an example of inductive reasoning,

Deduction and induction are both valid forms of reasoning, and both deduce and induce are verbs that describe types of logic.

Induce vs. Deduce Check: Since deduction distills broad, categorical observations into specific, concrete conclusions, and deduction and distill each begin with the letter D, it should be easy to remember what this verb means.