Home » Binded or Bound – Which is Correct?

Most English verbs follow a standard set of conjugation rules. These are called regular verbs. Regular verbs are conjugated into past tense by adding the suffix –ed to the end of the word.

Not all English verbs are regular, though. These are called irregular verbs, and some of these don’t seem to follow any rules at all.

A few, though, are at least somewhat predictable. Many verbs that end in –ind simply change to –ound in the past tense, such as find, which becomes found.

What about bind? Is the word regular, forming binded in the past tense, or does it become bound?

What is the Difference Between Binded and Bound?

In this post, I will compare binded vs. bound. I will outline the correct past tense of bind and illustrate how it should be used in example sentences. This way you can see how it appears in context.

Plus, I will show you a helpful memory tool that should make choosing either binded or bound a bit easier your own writing.

When to Use Bound 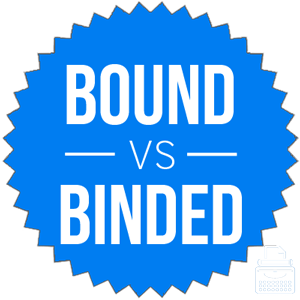 What does bound mean? Bound is a verb, and it has multiple meanings. In one sense, to bound is to leap, the way a gazelle might bound across the savanna.

In another sense, bound means to establish an edge, the way the state of Oregon is bounded to the north by the Columbia River.

In this article, though, I will focus on bound’s use as the past tense conjugation of the verb bind, which means to tie something up or constrain something.

In the first example, one person has been literally bound with rope, while in the other two a person and a country have been figuratively bound by legal requirements.

When to Use Binded

What does binded mean? Binded is an incorrect conjugation of the verb to bind. In the chart below, which graphs bound vs. binded over time, you can see that its use is far outstripped by that of bound:

In the rarest of occasions when binded does appear, it is usually in the context of documents that have been organized together in a binder or book, like in the sense of a binded thesis.

Even in this context, though, bound is still a better choice.

Bound is the correct past tense of the verb bind, while binded is a misconjugation.

Since bind becomes bound in the past tense, just like its rhyming counterparts find and found and grind and ground, it is easy to remember to use bound instead of binded in your writing.

Is it bound or binded? Bound has many meanings, including the past tense of bind. Binded is an incorrect form that rarely appears in print. Use bound in your own writing.