As with any modern language, English has many words that are differentiated by only a single character. Writers need to be careful to use these words correctly, since even an innocent typo can completely change the meaning of the sentence.

Two such words, lath and lathe, are related in that they are both used in the context of wood products. However, one is a machine, and the other is a building material. If you accidentally used the wrong word, you would probably confuse your audience.

If you aren’t sure whether you should use lathe or lath in your writing, you should consider the topic of your sentence. This article will shed light on the meaning of these two similar words to aid you in this endeavor.

What is the Difference Between Lath and Lathe?

In this article, I will compare lath vs. lathe. I will use each word in a sentence to demonstrate its proper context.

Plus, I will reveal a useful memory trick that will help you remember whether to use lath or lathe in your own writing.

When to Use Lath

What does lath mean? A lath is a thin strip of wood, usually used in building construction in flooring or certain kinds of ceilings. In a sentence, the word lath functions as a noun.

When to Use Lathe

What does lathe mean? Lathe is also a noun. A lathe is a type of tool used in woodworking and metalworking. It is a machine which rotates a piece of wood, metal or other material on a spindle in such a way that it spins against a cutting surface, which shapes the material into a round, usually somewhat cylindrical form. 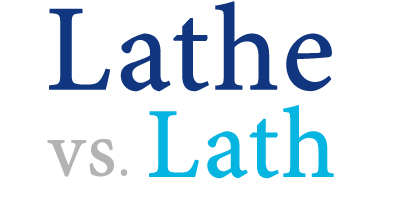 Here’s a helpful trick to remember lathe vs. lath.

You can remember that lathe is a spinning machine since a lathe has a spindle, and both spindle and lathe end with the letter E.

Is it lath or lathe? While both of these words are wood related, they are quite different from each other.

Even though both of these words are related to wood, they are not interchangeable.

If you remember that a lathe has a spindle that turns, and that lathe and spindle each end with the letter E, you can always be sure to reserve lathe for this and similar contexts.

Remember, you always have the option to check this site any time you have a question on word usage or other language issues.