If you have ever taken a psychology course, you may have heard the word resiliency defined as resistant to risk factors. If you have seen a different word in other contexts, however, you aren’t alone—another noun, resilience is more common outside the social sciences.

Which word should you use in your own writing? Are there any other differences you should know about? If these are the questions you ask yourself when you read these words, continue reading for some answers.

What is the Difference Between Resilience and Resilience?

In this post, I will compare resilience vs. resiliency. I will use each of these words in at least one example sentence, so you can see how they appear in context.

Plus, I will show you a helpful memory tool that makes choosing either resiliency or resilience a bit easier.

When to Use Resilience 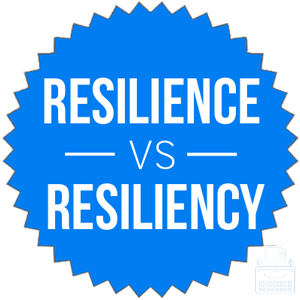 What does resilience mean? Resilience is a noun. It refers to the ability to recover quickly from difficulties.

Resilience has become a common term in the field of psychology, where it describes an individual’s capacity to thrive in the face of significant trauma.

It can also be used in many other contexts, of course. One could say that a sports team defending its title from many challengers has resilience.

Here are a few examples of resilience in a sentence,

Resilience is a perfectly legitimate noun, but you might be more likely to see its associated adjective resilient in most contexts. For some reason, writers prefer to say that someone is resilient, rather than that they have resilience.

When to Use Resiliency

What does resiliency mean? Resiliency is a variant of the same noun. Most spell checkers won’t flag it as an error, but usage authorities consider it a needless variant.

The above chart graphs resiliency vs. resilience. As you can see, resilience is much more common and has been for at least 100 years.

That said, resiliency is becoming more common, likely due to its increased use in the social services. If the chart included data from social science journals and other periodicals, perhaps resiliency would be more common yet.

Resilience is considered the standard form of this noun, and many usage authorities consider resiliency a useless variant.

Resiliency is becoming more common in recent years, likely due to its use in social science fields. Eventually, it might become an accepted variant, but for now, it’s a needless variant found in academic journals and periodicals. Stick to resilience in your own writing.

Since both resilience and its adjective form, resilient, contain three syllables, you should have an easy time remembering to use resilience instead of resiliency.

Is it resilience or resiliency? These words have the same meaning, but many advise against one of them.