If you are the best at what you do, do you stand alone or standalone?

These terms are confusing, since they consist of the same words. Many writers aren’t sure whether to choose the compound version or the single-word version.

In reality, though, each term has an independent usage case, and their meanings never overlap. If you are having trouble with stand alone vs. standalone, continue reading.

What is the Difference Between Standalone and Stand Alone?

In this post, I will compare standalone vs. stand alone and use each spelling in multiple example sentences that demonstrate the proper use in context.

To make choosing standalone or stand alone easier in the future, I will also show you a memory trick that aids in this decision.

When spelled as a closed compound or hyphenated compound, stand-alone/standalone is an adjective. You can think of it as a synonym for independent.

It often describes a machine or other device that doesn’t rely on other devices to work. It can also appear in other contexts; a stand-alone/standalone software license, for instance, allows for installation on a single computer, usually without the need for renewal or subscription.

Is stand alone hyphenated? While the closed compound standalone is becoming increasingly common, you are more likely to find it in hyphenated form in dictionaries. For instance, the AP Stylebook prescribes the hyphenated stand-alone as the adjective. Check your local style guide to know how your company or organization prefers it to be spelled.

The constant trend is for compound words in English to start as a multi-word phrase (stand alone) before becoming a hyphenated compound (stand-alone). Eventually, writers drop the hyphen, forming a closed compound (standalone).

This may eventually happen with stand-alone­ also.

When to Use Stand Alone

An athlete who figuratively stands alone is unmatched in terms of skills, talent, or sheer physical power.

Stand alone could also mean simply to be apart from others, either literally or figuratively. 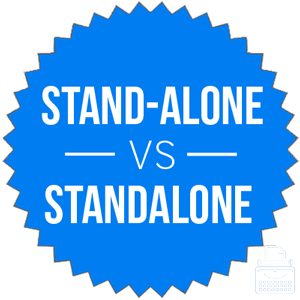 Let’s go over a trick that can help you pick between these two variations in your future writing.

Since the word stand is itself a verb, you can remember that stand alone is a verb phrase by memorizing the functions of the individual words in the phrase.

Is it stand alone or standalone? Stand-alone and standalone are adjectives that mean independent. Stand alone is a verb phrase that means to be apart or to be in a league of one’s own.