Home » Buildup or Build Up – What’s the Difference?

When two or more words are joined together to form a single, longer word, they become a compound word.

Compounds are confusing because, most of the time, each individual word is still a part of the language. It can be difficult to remember whether to use the new compound, or keep the words separate.

In many cases, your choice depends on the part of speech you want to use. Most compounds are nouns, for example. Buildup and build up are an excellent example.

What is the Difference Between Buildup and Build Up?

In this post, I will compare build up vs. buildup. I will use each variation in at least one example sentence, so you can see how it appears in its context.

I will also show you a helpful memory tool that will make choosing build up or buildup a simpler proposition.

When to Use Buildup

What does buildup mean? Buildup is a noun that refers to an increase in something, usually tension or pressure.

In literature, you could think of the rising action plot phase as a buildup to the climax. In other contexts, a buildup could refer to a layer of plaque on someone’s teeth, or dirt that become caked onto a mechanism that hasn’t been cleaned recently.

The sentences below are further examples.

Buildup is a compound of the words build and up. These words first became compounded together in the early 20th century, but today, buildup is a familiar word to most English users.

When to Use Build Up

What does build up mean? Build up, meanwhile, is a verb phrase that means to bolster, accrue, or otherwise increase something.

A sports team might build up its defense by trading for a star player from another team, or an enterprising person might build up a savings account by becoming a more frugal spender. 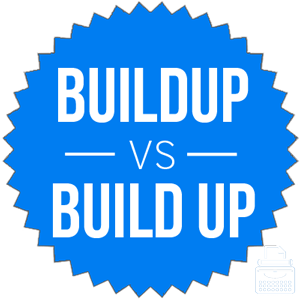 You can’t substitute these words for each other, so you will need to know which is which.

Buildup vs. Build up Check: Build by itself is a verb, so as long as you can remember the individual meanings of each of the words in this phrase, remembering that it functions as a verb in sentences should be simple.

Is it buildup or build up? These words are not interchangeable, so you will need to know the difference between them.