One of the central debates in the world of education involves the materials and overall course of study that schools follow. All schools have the goal of providing the best and most thorough education for students, but how exactly they do so is the subject of fierce disagreement.

The words curricula and curriculum appear frequently in these discussions. These words are clearly related, but what exactly do they mean? Are they different versions of the same word? Continue reading to learn more.

What is the Difference Between Curricula and Curriculum?

In this post, I will compare curriculum vs. curricula. I will use each of these words in several example sentences to give you an idea of how they should appear in context.

Plus, I will show you a helpful memory tool that should make choosing curriculum or curriculums much easier.

When to Use Curriculum

What does curriculum mean? Curriculum is a noun. It means the subjects, materials, and plan of study for an academic course.

In America, public schools have moved toward a “common core” curriculum that attempts to standardize academic content nationwide.

Still, each individual classroom, teacher, and school will have a different curriculum for each subject. This includes books and specific assignments, as well as lesson plans and tests.

Here are a few examples of curriculum in sentences,

Merriam-Webster notes that curriculum is a Latin word that is related to the verb currere, which means to run. It has been part of mainstream English since the early 19th century.

When to Use Curricula

What does curricula mean? Curricula is a plural form of curriculum. You could think of it as meaning more than one course of study.

What is the plural of curriculum? Curriculum actually has two plurals: curricula, and curriculums. They are both considered correct, but curricula is vastly more popular.

The below chart graphs curricula vs. curriculums since 1800.

This chart isn’t exhaustive in its scope. It notably excludes other sources where these words might be common, like college syllabuses and personal résumés. Still, we can clearly see that most writers prefer curricula to curriculums. 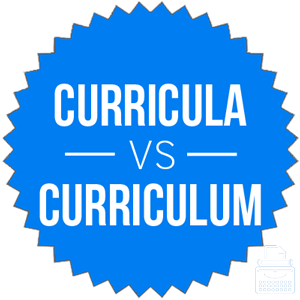 To make it easier to remember the difference, notice that curricula is the shorter of the two words, just as plural is shorter than singular.

Is it curricula or curriculum? Curriculum and curricula are the singular and plural forms, respectively, of a term that refers to the subjects and materials of a course of study.