Home » Roofs vs. Rooves – Which is Correct?

English pluralization can be complicated. Not all nouns follow simple rules when transitioning from single to plural form.

Hoof, for instance, becomes hooves in the plural. On the other hand, spoof simply adds the plural -s suffix to become spoofs. Poof and poofs follow the same rule.

What about roof? Should it become rooves, like hooves? Or would it be better as roofs, like spoofs and poofs?

Both versions have historical precedent. Today, though, only one form is considered standard. If you don’t know whether to use rooves or roofs, continue reading to learn more about these confusing words.

What is the Difference Between Roofs and Rooves?

In this post, I will compare roofs vs. rooves and outline the correct plural form of roof. I will use several example sentences, so you can see the proper spelling in context.

Then, I will share a helpful memory trick that makes choosing either roofs or rooves much easier.

When to Use Roofs 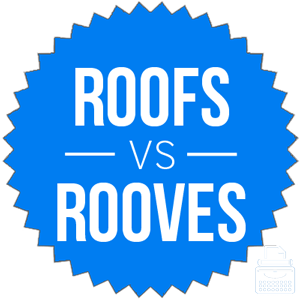 What does roofs mean? Roofs is the standard plural form of the noun roof, which is a covering over a building. Throughout history, roofs have been constructed of thatch, clay, palm leaves, wood, and many other building materials.

The archetypical image of a roof is of a peaked structure that covers an entire building and slopes gracefully from a central high point to meet the walls on all sides. Not all roofs share this design, though. Many buildings are flat on top, and modern buildings are engineered in many creative ways to conserve energy and appear stylish.

Here are some sentences that contain the word roofs,

When to Use Rooves

What does rooves mean? Rooves is an incorrect pluralization of the word roof and should be avoided.

Roofs has been the standard form since at least the 18th century. The chart below shows the relative usage of rooves vs. roofs in English since 1800:

Today, the usage of rooves is so low as to approximate zero. Bryan Garner, in his book Garner’s Modern English Usage, estimates the disparity to be 535:1. In other words, there is only one correct plural form of roof—and it is roofs.

You should use roofs in all contexts. Rooves is always considered a spelling error and will only serve to distract your readers or cause them to question your credibility.

Since roofs is spelled with an F, like the word first, remember that roofs is the first word you should think of when you need a noun to refer to more than one roof.

Is it roofs or rooves? Only one of these words is considered a correct plural form of the word roof.