There are a few rules guiding the use of hyphens and dashes in writing. Some of these rules are instinctual, but some are also easy to forget or lose track of. In this post, we’ll look at the differences between the hyphen and the various forms of dashes.

When to Use a Hyphen

The hyphen is a punctuation mark used between compound words and names or between the syllables or characters of a word. The hyphen generally acts to connect things together. We see it most in its role in connecting compounds. For instance,

We also see the hyphen when they separate letters or numbers that are not inclusive, numbers like telephone and ISBN book numbers.

There are actually two main forms of dashes: the en dash and the em dash. Most people aren’t familiar with the differences between the two, but they both have their own distinct purposes.

When to Use an En Dash 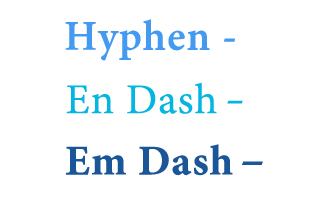 The en dash is much less versatile than the em dash and is therefore used much less frequently. The en dash’s primary function is to indicate a range of inclusive numbers. For example,

In the above sentences the en dash is being used as “to.” But, we should remember, when the first element is preceded by “from” or “between,” we never use the en dash. For example,

When to Use an Em Dash

The em dash is used in many more ways than the en dash. When people talk about using dashes, they are almost always referring to the em dash. The most common way to use the em dash is to amplify or further explain a passage:

The amplifying, or sometimes exclamatory, nature of the em dash is what sets it apart from commas, parenthesis, or colons. If you wish to give a certain sentence a little more jazz or emphasis, an em dash might be more appropriate than simple opting for commas. For instance, in the above “pencil” example, the dashes may be more appropriate than a set of commas in order to amplify my desperate need for a pencil.

The em dash is also used to indicate sudden breaks in thought or speech:

In order to avoid confusion in your sentences, you should never use more than two em dashes per sentence.

Putting this into Microsoft Word

Now you might be saying, this is all well and good, but how do I insert these into my text?

Well, inserting hyphens is as easy as hitting the hyphen key on your keyboard,

Inserting an en dash is a bit more tedious but still easy nonetheless. Begin by typing a space and then the two hyphens. For example,

Then you will simply need to eliminate the two spaces between 2011 and 2012, so your final sentence will appear as,

To insert an em dash into Word type two hyphens in between a word with no spaces. For example,