Some nouns can be counted individually. A person could count the crayons in a box, the eggs in a carton, or the people on a train. These are called count nouns.

Other nouns can’t be counted individually. A person could not count air, dirt, or happiness. These are called mass nouns.

English has specific words to use in reference to the quantity of mass and count nouns. Amount and number are two such words. Continue reading to discover the difference between them, and to find out whether you should use number or amount.

What is the Difference Between Amount and Number?

In this article, I will compare amount vs. number and their uses. I will use each word in an example sentence to illustrate its proper meaning and context.

Then, I will explain a helpful trick to use when deciding whether to choose amount or number for your writing, depending on context.

When to Use Amount

What does amount mean? Amount can be a noun or a verb.

As a noun, it refers to the quantity of something. Amount is used with mass nouns. In other words, amount should be used with nouns that cannot be counted individually, also called non-count nouns. You cannot count the water in a glass, for instance, or the religious freedom in America.

When amount is used as a verb, it means to become or to equal. Here are two examples.

When to Use Number

What does number mean? Number is also a noun or a verb. Like amount, as a noun it refers to the quantity of something. Unlike amount, however, number is used with count nouns.

Count nouns are nouns that could be counted individually. You could not count the sand on the seashore, for instance, but you could conceivably count how many grains of sand are in a small jar. Sand is a mass noun, and a grain is a count noun.

Here are some examples of number used as a noun.

Number can also be a verb, where it means to count or to add up to. 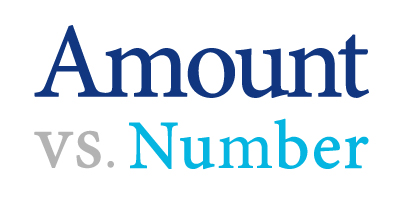 Now that we understand the differences, let’s look at a helpful trick to remember number vs. amount.

If you aren’t sure whether to use amount or number, remember that “a” “mount” is used with “a” “mass” noun. Amount and a mass noun both begin with the letters “am.” This should help you keep these words straight.

Is it amount or number? Amount and number both refer to quantity, but each word has its own specific use.

By remembering the M that is part of the words amount and mass, you can be sure to reserve amount for use with mass nouns.

If you still need help, you can reference this article in the future.