Home » Anyplace or Any place – Which is Correct?

Have you ever lost the keys to your home, or misplaced your wallet?

If you still hadn’t found them after checking all the most likely spots, you might throw your hands up and say, “They could be anywhere!”

The trouble is, depending on the person you’re talking to, they could also be anyplace. Or is it any place?

Anywhere is an adverb, so between it and any place, it would be the better word for the sentence you spoke. But what about anyplace? As if you weren’t already confused, now you have three ways to describe all the places your lost keys could be hidden.

What is the Difference Between Anyplace and Any Place?

In this post, I will compare any place vs. anyplace. I will outline the correct word and explain how it should be used in the proper context.

I will also show you a helpful memory tool that makes choosing any place or anyplace a bit easier.

When to Use Anyplace

What does anyplace mean? Anyplace is an informal synonym of the word anywhere, found in colloquial and nonstandard speech. Anywhere, of course, refers to an unspecified location to describe where an action happens.

The statement “They could be anywhere!” describes the unknown nature of the true location of the sentence’s subject. Replacing anywhere with anyplace would not change someone’s understanding of the sentence.

That said, anyplace is, at best, a colloquial variant of anywhere. It is common in casual, spoken English, especially in informal settings amongst familiar acquaintances. In writing, however, it is considered nonstandard and inappropriate for formal writing scenarios.

As The New York Times puts it,

When to Use Any Place

What does any place mean? The phrase any place consists of an adjective, any, that modifies the noun place. Any place is, therefore, a noun phrase.

Any place means a nonspecific location. The exact location may not actually matter, like in the phrase any place at the table, or it may be unknown, like the statement avoid any place with bedbugs.

You could easily pluralize the noun places, and ask a question like “Are any places to eat still open?” If you wanted to get really creative, you could even put words between any and place, like in the phrase any other place. 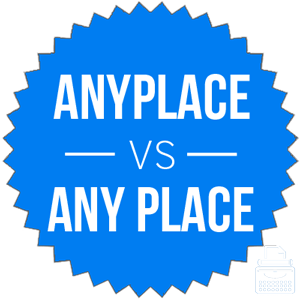 Any place is a legitimate phrase, but anyplace is not. Any time you are tempted to use anyplace as an adverb that describes somewhere something could happen, use anywhere instead. This word is more appropriate for formal writing.