Home » In Tact or Intact – Which is Correct?

In English, two words that have been joined together to form a single word are called compounds. English has many, many compounds, like waterproof, sleepwalking, dodgeball etc.

While intact looks like a compound of in and tact, it is not a compound at all. The prefix in- is actually a Latin negation. More on that below, but suffice it to say that you cannot use intact and in tact interchangeably.

What is the Difference Between In Tact and Intact?

In this post, I will compare in tact vs. intact. I will outline the correct spelling of this word and use it in a few example sentences, so you can see how it appears in context.

I will also show you a mnemonic device that can help you remember whether to use in tact or intact.

When to Use Intact 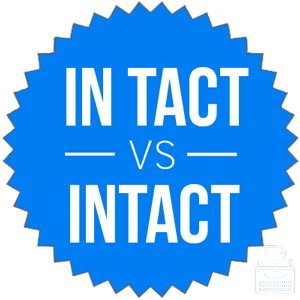 What does intact mean? Intact is an adjective that means unbroken or in a state of wholeness.

If you drop a glass and it does not break, the glass remains intact. An ancient Mesopotamian artifact that is relatively undamaged by time and the elements could also be described as intact.

We could say that the ancient Mesopotamian artifact remains untouched by forces that would damage it.

When to Use In Tact

What does in tact mean? By itself, the word tact has a different meaning than intact. As its own word, tact refers to the ability to handle difficult interpersonal situations sensitively, without offending anyone.

In is a preposition that means inside something or relating to something.

If someone says something in tact, they are saying something with care and sensitivity. In tact becomes an adverb phrase when used this way because it describes how a verb is performed.

You would probably be better off using the adverb tactfully in these situations, but the sentence below shows one possible usage of this phrase,

Since these terms are different parts of speech, your choice depends on how you use each word in a sentence.

You should probably choose tactfully instead when you need an adverb, though.

Intact vs. In Tact Check: Since intact is a single word, like intractable or infinitesimal, it should be simple to remember to use it as an adjective.

Is it intact or in tact? These terms are not interchangeable.