Definition of Weight: Weight is the measure of the heaviness of an object or person; a heavy object used in sports to throw, put, or lift; something heavy to hold down or counterbalance other things; a burden or pressure; and, the importance, influence, or authority of someone or something.

The word weight also refers to making heavy or heavier, and, to cause to feel concerned or burdened.

Pronunciation of Weight: Weight is pronounced wait. Weight rhymes with the words bait, trait, and hate.

How to Use Weight in a Sentence

What does weight mean? The word weight can function as a noun or a verb.

As a noun, weight refers to the heaviness of something or someone. 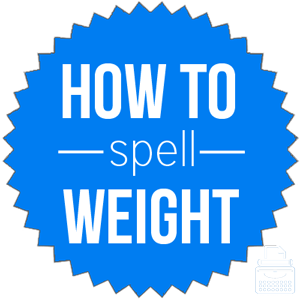 Weight also refers to a heavy object used in athletic events and exercises.

Weight, generally, refers to anything that is heavy and can hold down or counterbalance another object.

Sometimes, the word weight is used figuratively to refer to a burden or serious concern that causes people to think or worry.

Finally, weight is used to refer to one’s influence or power.

As a verb, weight functions transitively. It refers to making something heavier, and to making one feel concerned or burdened.

Phrases & Idioms That Use Weight

By weight: based on weight rather than volume or some other measurement.

Be worth your/its weight in gold: extremely useful or helpful or valuable.

Carry a lot of weight with someone: be influential or respected by someone.

Carry the weight of the world: to feel or act as if one has an immense amount of problems.

Give weight to: to lend or attach importance or authority to something.

According to Merriam-Webster’s, the word weight first appeared before the 12th century.

This word comes from Middle English wight, weght from the Old English word wiht, which is related to Old Norse vaett, meaning weight, and Old English wegan, meaning to weigh.

Where it refers to the importance of someone or something, the following words can be substituted for weight.

When it is used to refer to one’s pull, influence or power, the following synonyms can replace weight.

Outside Examples of Weight

The word weight can function as a noun and a transitive verb.