Home » Spelling Dictionary » How Do You Spell Venue?

Definition of Venue: A venue is a place where events are held, such as concerts, sporting events, musical acts, etc. It also specifically refers to the place in which a lawsuit might or should be tried.

A venue doesn’t have to be any particular size, and they can range from large to small. Huge concert and sport stadiums can seat hundreds of thousands of people, while smaller, more intimate venues might seat only a few hundred people.

How to Use Venue in a Sentence 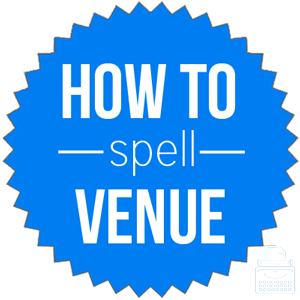 What does venue mean? A venue is a place in which specific events are held.

Venue is a noun, and thus, can function as a subject or object of a sentence.

The plural form of the word is formed by adding “-s” to make venues.

Phrases That Use Venue

There are no common phrases or idioms that use the word venue.

According to Merriam Webster’s, this word was first used in 1531. It was likely borrowed from Anglo-French and altered from vinne, visne, which literally means “neighborhood, neighbors.”

Ultimately, it came from the Latin word vicinus meaning “neighboring.”

Depending on whether the context of the situation is related to law or not, there are a few different synonyms for venue.

Outside Examples of Venue

The word venue is a noun that refers to a place or location where a specific type of event is held.

Since it is a noun, it functions as either a subject or object in a sentence. By adding an “-s”, the word becomes plural.