Definition of Spiral: Spiral describes something that winds around a center or pole and gradually recedes from or approaches it; of or relating to the advancement to higher levels through a series of cyclical movements.

A spiral is the path of something as it moves around a central point while continuously approaching or receding from it. It may also refer to a single coil or turn in a spiral object. It is also the name of any shape having a spiral form.

How to Use Spiral in a Sentence

What does spiral mean? Spiral can function as a noun, verb, and an adjective. Spiral has multiple meanings as a noun. It is a shape or object with one or more turns about an axis. It may also refer to a path of a point that winds around a central point continuously receding from or approaching it, or, one coil or turn in a spiral-shaped object, or, an object that has a spiral form. 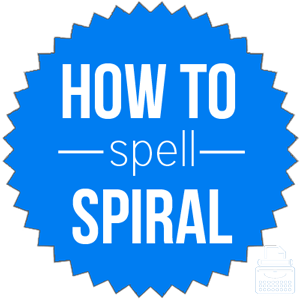 When used as an adjective, spiral describes something that is of a spiral shape, in that there is a winding around a center point and a gradual approaching or receding from it. It also describes anything that is of or relating to the advancement of higher levels through cyclical movements.

Spiral is often used as a verb to describe the action of going and rising and falling in a spiral course, to cause (something) to spiral, or to form into a spiral shape.

Phrases & Idioms That Use Spiral

Downward spiral: a situation in which some thing(s) gets worse and worse or decreases continuously.

Spiral staircase: a set of stairs that winds around a central point.

Upward spiral: a situation in which some thing(s) gets better or increases continuously.

This word comes from Medieval Latin spiralis, meaning of a spiral, which comes from Latin’s spira, meaning coil.

For uses of spiral as a verb, the following synonyms may be substituted:

The adjective form of spiral can be replaced by the following synonyms:

Outside Examples of Spiral

Spiral can function as a verb, noun, and an adjective. Overall, it refers to an object or action that coils, or moves in series of cyclical turns or is shaped like a spiral, as a helix.