Definition of Share: Share, as a verb, means to divide and distribute in, usually, equal portions; to partake of, experience or enjoy or have in common with others; to grant or give a share in or portion of; to tell (something) to others.

As a noun, a share is a piece, portion, or stock in something owned by an individual or group. A share in a business, company, property, etc., is usually paid for or earned through a capital investment.

As a transitive verb, share means: to divide or distribute in portions or shares; to occupy, experience, or enjoy with others; to have in common; to grant or give a share in; to tell one’s thoughts, feelings, experiences to others. 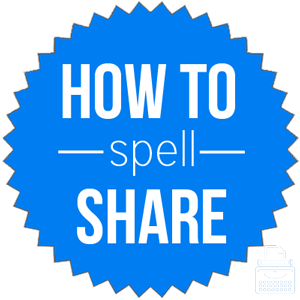 As an intransitive verb, share means: to have a share (in); to apportion and take shares of something; to talk about one’s thoughts with others.

As a noun, it refers to a stock(s) in a business or company, a portion belonging to or contributed by one person, or a part of a property or corporation.

Go shares: to have equal concern or to partake equally, as in a business venture.

Share of the pie: a portion or piece of an amount of money.

Fair share: a reasonable or fair amount of something.

Share the wealth: to spread or share one’s riches, goods, etc., with others instead of keeping it for oneself.

The Lion’s Share: a larger portion than others’ portions; the largest part of a whole.

Share was first used as a verb in 1590, according to Merriam-Webster’s.

There are a couple synonyms for the verb share:

As a noun, there are several synonyms that can be substituted for share, depending on the context and meaning:

Finally, the following words can be used to replace share when it means a legal right to participation in the advantages, profits, and/or responsibility of something:

Share can function as both a noun and a verb, but it is used as a verb more often. As a verb, generally, the word involves giving or taking a piece or part of something. As a noun, it usually refers to one’s piece or part in something.