Home » Spelling Dictionary » How Do You Spell Satellite?

Spelling of Satellite: Satellite is spelled s-a-t-e-l-l-i-t-e. Don’t forget there are two “-l’s”!

Definition of Satellite: A satellite is an object or vehicle designed to orbit the earth, the moon, or some other celestial body and is used to relay radio signals or capture images. It may also refer to a small unit within a larger system that is controlled or managed by a centrally-located body or unit.

How to Use Satellite in a Sentence

What does satellite mean? In most cases, satellite is used as a noun. The most common use of the word is as an object that orbits a planet or some other celestial body. Most of these types of satellites are used to reflect a signal. 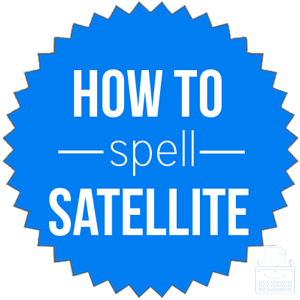 A satellite can also describe an object or person that is lesser in size or authority than the unit or body commanding it.

Sometimes, satellite functions as an adjective describing something of or related to a satellite, or to the relay of electromagnetic signals by communications satellites.

Phrases That Use Satellite

Satellite is used alongside many nouns to describe the particular technology type or position, though there are really no common phrases or idioms in which the word is used.

Merriam-Webster’s puts its first use sometime in 1548. It comes from Old French, from the Latin word satelles, satellit-, which meant “armed guard” or “bodyguard” or “attendant.”

If we go back far enough, the Latin word originated from the Etruscan word zaθilaθ, which refers to the person who carries or strikes with an axe.

The appropriate synonym depends upon the type of satellite about which one is speaking.

When referring to a type of artificial body placed in orbit, the following synonyms might be used,

In astronomy, when talking about a celestial body that orbits another planet, the following might be used,

When referring to a unit or individual that is dependent upon a larger unit or organization, the following words are possible synonyms:

Outside Examples of Satellite

Satellite can be used as both a noun and adjective.

Generally, it refers to an object or body that is controlled by or dependent upon a larger, more powerful unit.

When used as an adjective, it describes something that is on the periphery or a type of technology.