Spelling of Reassess: Reassess is spelled r-e-a-s-s-e-s-s. Unlike obsess, reassess has double “-s’s” in the middle and at the end.

Definition of Reassess: Reassess means to assess something again. Before making a decision, one might reconsider—or reassess—the facts and the situation a second, and perhaps a third, time in order to avoid making an error or poor decision.

How to Use Reassess in a Sentence

What does reassess mean? Reassess is a verb. It is the act of assessing a decision, action, or situation a second time before proceeding. 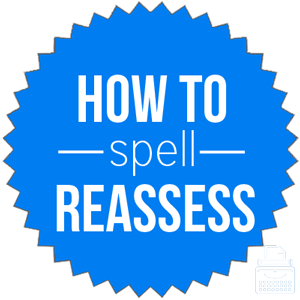 By adding “-ment” to reassess, the noun reassessment is formed. Reassessment refers to the actual process of reassessing something. If there has already been an assessment but, for whatever reason, another needs to be done, we would call that a reassessment.

While there are no phrases or idioms that make use of the word reassess, there are some phrases that are synonymous with the word.

According to Merriam-Webster’s, reassess was first used in circa 1689.

There are several synonyms for the word reassess, however, some are more for specific situations.

Outside Examples of Reassess

Reassess is a verb that is formed by adding the prefix “re-” to the verb assess, meaning to assess (something) again.