Definition of Original: Original describes something or someone that was first or preceding all others. Someone or something that is original is not derived from something else. Instead, it is fresh and different from previous practices or ideas.

Something or someone that is an original is the first form or model from which others are made, developed, or derived. It may also refer to something that is not a copy, not a print or reproduction of some other work. An original may also refer to a person with a unique or unusual personality, a character.

How to Use Original in a Sentence

What does original mean? Original can function as both a noun and an adjective, both of which are common.

As an adjective, original describes someone or something as being first before all others and not like anything preceding it. 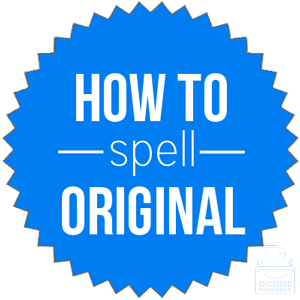 As a noun, an original is the first of something, from which other similar things were modeled or created; an original is an authentic work that has been created or composed firsthand, which is often copied by others.

Finally, an original may be used to refer to a person or being with a very creative, unusual, or curious personality that is unlike any other.

The adverb, originally, is formed by adding “-ly” to the end of original. It describes an action that was done or a thought that occurred in the first place or primarily, before others.

Phrases & Idioms That Use Original

According to Merriam-Webster’s, the word original was first used in the 14th century.

The following words are synonymous with original when it is used to mean coming before all others in time or order:

When it’s used to describe someone who is very creative and inventive, the following words can be substituted for original:

The following words can replace original when it’s used to describe something that has not been previously known or experienced before:

Outside Examples of Original

Original can function as a noun and an adjective. It refers to someone or something that is new, first, innovative, and not copied or previously known.