Definition of Memorabilia: Memorabilia are things that are worthy of remembrance, things that stir recollection, or are collected because of their association with a specific field or interest.

One may collect photos, newspaper clippings, autographs, CDs, posters, etc., from a historical event or a performance, such as a World Series baseball game or band’s last concert. People commonly collect items over time from their own experience or work in a particular field to commemorate their career or passion.

How to Use Memorabilia in a Sentence

What does memorabilia mean? Memorabilia can be a singular or plural noun. Memorabilia refers to items or materials that are collected and kept because they are connected to a particular person, historical event, field, culture, interest, etc. 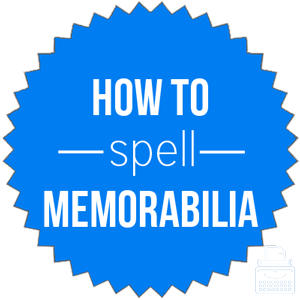 Memorabilia also refers to objects that are unique and worthy of being remembered.

The word memorabilia was first used in 1785, according to Merriam-Webster’s.

There are no exact synonyms of memorabilia, however, there are some words that are closely related in meaning and can be used in some cases. Memorabilia is like souvenirs, and other items kept to recall certain memories from particular experiences, and thus, the following words can be used to replace memorabilia in some cases:

Outside Examples of Memorabilia

Memorabilia is a noun. Memorabilia can include anything that is remarkable and worthy of remembrance.