Home » Spelling Dictionary » How Do You Spell Lanyard? 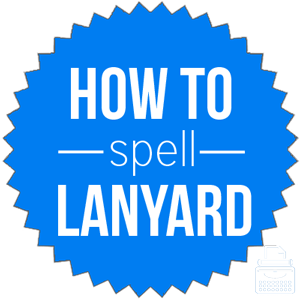 Spelling of lanyard: lanyard is spelled l-a-n-y-a-r-d. This can be tricky as the yard part of the word is not fully sounded. It can also be spelled as lanyard, although this is less common.

Definition of lanyard: A lanyard normally refers to a chord that is worn around the neck to hold an item such as a key, identity badge, or whistle.

How to Use Lanyard in a Sentence

Phrases That Use Lanyard

Lanyards are often used for security reasons to display identity.

They may also be used to aid people with organization.

According to Merriam-Webster, lanyard entered the English language in the 17th century. In Middle English, a lainer was a strap used for fastening clothing or armor. In Old French, a laniere also refers to a leather strap.

It is believed that the yard section of the word was originally a nautical term referring to a “long beam used to support a sail.”

Lanyards worn around the neck (that you can attach objects to) are specifically designed objects. The following words are objects that could perform similar functions to a lanyard:

Outside Examples of Lanyard

Lanyard is a noun that most commonly refers to a chord worn around the neck which has been designed to hold an object. It may also be used to refer to a loop of rope in nautical or military contexts.