Home » Spelling Dictionary » How Do You Spell Kayak?

Definition of Kayak: A kayak is a boat, similar to a canoe, originally used by the Inuit. It is constructed with a light frame, often with a watertight covering that has a small opening in the top in which a person can sit.

Kayak is also a verb that means to use or travel by kayak.

Pronunciation of Kayak: Kayak is pronounced kī-ak, with the “kay-” sounding like “-k” + a long “-i”.

How to Use Kayak in a Sentence

What does mean? Kayak, as a noun, is a canoe-like boat that is pointed at both ends and requires the use of a double-ended paddle to propel it. While there are tandem kayaks, most are only single seaters.

When referring to an individual who kayaks frequently, add an “-er” to the word to form the noun kayaker. 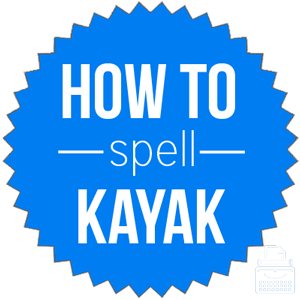 When explaining the act of using or traveling in a kayak, it is used as a verb. The past tense of the verb is kayaked and the gerund is kayaking.

A Few Facts About Kayak

The word kayak is a palindrome, meaning it is spelled the same forwards and backwards.

Traditional Inuit and Yupik, (Eskimo), kayaks are made by stretching animal skins over a frame of wood or whalebone.

According to Merriam-Webster’s, kayak was first used in the year 1757. The word originates from the Inuit word qayaq.

Since kayak is the name of a specific type of boat, there are no synonyms for the word. Canoe is not synonymous with kayak as it is a different type of vessel.

Outside Examples of Kayak

Invented by the Inuit people, a kayak is a narrow boat that is pointed at both ends and propelled by a single paddle. The word can act as both a noun and a verb.