Definition of Immature: Immature means the lack of complete growth or development. It also refers to someone who exhibits a lower level of maturity than expected.

How to Use Immature in a Sentence

What does immature mean? Immature is an adjective most often used to describe someone who acts in a childish or less mature way than expected of their age.

It also refers to something or someone that is not fully developed, grown, or ripe. 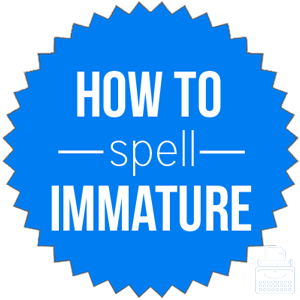 The adverb, immaturely, is formed by adding “-ly” to immature. Immaturely describes one’s action(s) as being immature or childish.

The noun is formed by dropping the “-e” and adding “-ity” to the end of immature.

The first known use of immature was in 1548, according to Merriam-Webster’s.

This word comes from the Latin word immaturus, in-, not, + maturus, meaning mature.

There are several synonyms for the word immature. Depending on which definition of the word is intended, there are different words from which to choose. However, there are a few words that can be used for both.

When referring to someone or something that is in its early stages of life and not fully developed, the following synonyms can be used to replace immature:

When describing one’s behavior as silly, childish, or lacking maturity, the following words can be used to replace immature:

Outside Examples of Immature

Immature is an adjective used to describe someone or something that is not fully grown or developed, or someone who acts childish and without a normal level of maturity.