Home » Spelling Dictionary » How Do You Spell Imagination? 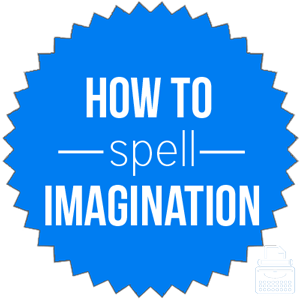 Spelling of imagination: imagination is spelled i-m-a-g-i-n-a-t-i-o-n. Take care as the t sounds like sh when said out loud.

Definition of imagination: The ability to creatively form ideas, images, or sensations within the mind.

How to Use Imagination in a Sentence

Using the word in its most literal sense, imagination is used to form mental images of things that are not present to the senses.

Imagination is the place in the mind where creativity occurs (the process of creating something original that does not already exist):

Phrases That Use Imagination

If someone asks for help and you want them to be more independent or resourceful, you might dismiss them by saying “use your imagination,” meaning “find a solution yourself.”

It has captured my imagination: Can be used to describe a general interest in something.

It sparked my imagination: This phase refers to something that has given someone an idea or creative impulse.

Believed to have entered the English language in the 14th century, the term imagination has Anglo-French origins and stems from the Latin verb imaginari which means “to form a mental image.”

The abstract noun imagination incorporates a wide range of ideas and meanings. The following list should therefore be treated as a list of associated words rather than direct synonyms.

Outside Examples of Imagination

Imagination is an abstract noun and refers to person’s ability to create an image, a thought, or a concept in their mind.