Definition of Greedy: Greedy describes someone or something that is selfish and/or desires much wealth, many possessions, or great fame. Greedy may also refer to someone who has a strong want for food and drink.

Pronunciation of Greedy: Greedy is pronounced gree-dee. It rhymes with preedy, speedy, needy, and seedy.

How to Use Greedy in a Sentence

What does greedy mean? Greedy is an adjective that describes someone or something that yearns for a lot of something—food, drink, fame, wealth, possessions, attention, etc. A greedy person does not typically want to share what he or she has or receives. 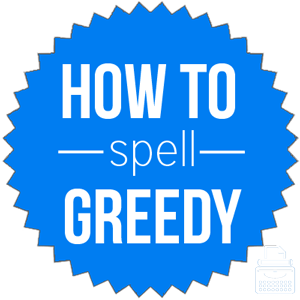 Greedy comes from the root word, greed, which is a noun that refers to the selfish and excessive desire for something.

The adverb, greedily, is formed by adding “-ily” to the noun, greed. Greedily describes the way in which a person performs an act with selfish or excessive desire.

The word greedy was first used before the 12th century, according to Merriam-Webster’s.

There are several synonyms for greedy, but some can only be used in certain situations.

The following synonyms are words that can be substituted for greedy when it refers to someone who has an excessive want for food and drink.

Outside Examples of Greedy

Greedy is an adjective used to describe someone who has an intense desire for power, wealth, possessions, fame, food, drink, etc.