Definition of Goddess: A goddess is a female god or deity, a being with supernatural powers or attributes, worshipped by people. It is also often used to describe a woman of great beauty, charm, or grace.

Pronunciation of Goddess: Goddess is pronounced god-ess. Although they are not spelled similarly, the word bodice (bod–iss) rhymes with goddess.

How to Use Goddess in a Sentence 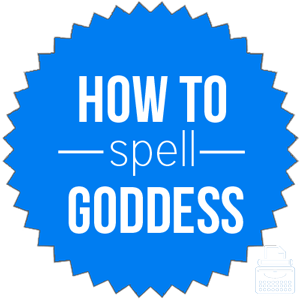 Goddess is also used to refer to a very beautiful or graceful woman.

This word was first used in Middle English in the 14th century, according to Merriam-Webster’s.

Goddess combines the Germanic word “god” with the Latin suffix “-ess”. This word follows the linguistic precedent of differing masculine and feminine endings, where “-ess” is a feminine ending. Other languages that employ this rule include Classical Greek, Egyptian, and Spanish.

Since goddess refers to a female deity, there are no direct synonyms of the word.

However, there are some words that can be substituted for the word’s secondary meaning of a significantly beautiful or admired woman, and they include:

Outside Examples of Goddess

Goddess is a noun that refers to a female deity or god in polytheistic religions. It has also come to be used to refer to an exceptionally beautiful, admired, or attractive woman.

The feminine suffix “-ess” was added to the word “god” in order to specifically refer to the female form.