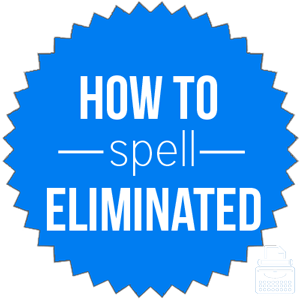 Spelling of eliminated: eliminated is spelled e-l-i-m-i-n-a-t-e-d. Once broken down into its five syllables, the spelling is fairly straightforward.

Definition of eliminated: Describes something or someone that has been deleted, removed, or sent away.

How to Use Eliminated in a Sentence

Eliminated is the past tense form of the verb eliminate. It can be used to describe an individual or team who has/have been removed from a competition.

A rather common example being,

It can describe something that is no longer under consideration.

It can also describe something that has been removed or ended.

Finally, it can be used in the field of mathematics.

Phrases that use Eliminate

When contestants were expelled from the competition, the American reality TV show The Amazing Race would say,

The infinitive form, eliminate, is used in a famous Arthur Conan Doyle quotation to explain how the fictional detective Sherlock Holmes solves crimes:

It can also be used as a euphemism for murder:

Merriam-Webster believes that eliminated came into common use in the mid-16th century. It originates from the Latin word eliminatus, the past participle of eliminare which means to “thrust out” or “expel.”

There are a large number of synonyms for eliminated. Use will depend on the context:

Outside Examples of Eliminated

Eliminated is the past tense form of eliminate. It is used to describe something that has been deleted and no longer exists.

Eliminate is commonly used when a team or individual has been removed from a form of competition.