Definition of Dignity: Dignity is the quality or state of being worthy, honored, or esteemed. It also means a high office, rank, or position. And finally, dignity refers to formal reserve or seriousness of manner, appearance, or language.

How to Use Dignity in a Sentence

What does dignity mean? Dignity is a noun. It refers to a state of being worthy of respect or honor or to the way one carries himself with seriousness and self-control.

Someone with dignity appears and behaves in such a way that is honored and admired. Dignity is an inherent state of nobility, worth, poise, and/or self-respect. 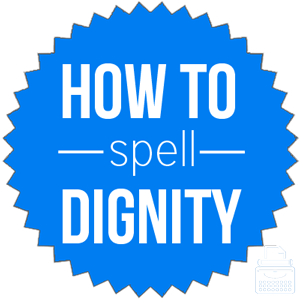 Dignity may also refer to the honor or respect associated with an important position or to the high office or rank itself.

Dignitary is related to the word dignity. A dignitary is a person of an exalted rank or high position, holding dignity or honor. The plural of dignitary is dignitaries.

Phrases & Idioms That Use Dignity

Beneath one’s dignity: fitting for someone considered less important.

Dignity was first used in the 13th century, according to Merriam-Webster’s.

The word dignity comes from Middle English dignete, from the Anglo-French word dignete. Ultimately, the word is of Latin origin, from dignitat-, dignitas from dignus, meaning worthy.

As it refers to a high position within society, dignity can be replaced with the following synonyms:

Outside Examples of Dignity

Dignity is a noun referring to a sort of stateliness or worthiness or to a high rank or office and the respect that comes with such a position.