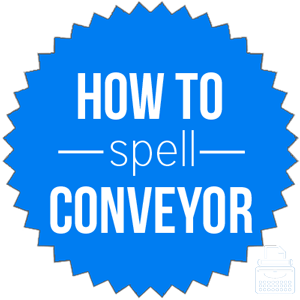 Spelling of conveyor: conveyor is spelled c-o-n-v-e-y-o-r. Be careful with the suffix. It is sometimes spelled with er at the end, but the or suffix is more common.

Definition of conveyor: conveyor is the noun form of the verb convey (to transport something from one place to another). A conveyor therefore refers to the person or thing doing the transporting.

How to Use Conveyor in a Sentence

What does conveyor mean? The noun conveyer most commonly refers to a piece of machinery that transports objects from place to place. They can be seen in factories, airports, and most commonly in modern supermarkets.

It can refer to someone or something that is communicating information or ideas.

You may also hear it used as a legal term.

Phrases that use Conveyor

Sushi-lovers will be very familiar with phrases such as:

Conveyor belt can be used as a metaphor to criticize something that is too manufactured or lacking in compassion or creativity:

Merriam-Webster believes that the verb convey entered English in the 14th century from the Anglo-French word conveier (to accompany or escort). Conveier could be a hybrid of the Latin words com (with/ together) and via (way/ road). The noun form conveyer is thought to have fallen into common use in the early 1500s.

There are no common synonyms when used in mechanical or legal contexts, but someone or something giving information may also be referred to as a:

Outside Examples of Conveyor

Conveyor is a noun which refers to: the belt mechanism used to move objects; something or someone that communicates information or ideas; or a legal transition of property.