Definition of Border: A border is the outer part or edge of something or a specific area; an ornamental design at the edge of something, such as a rug or poster; a boundary dividing different territories.

Border is also a verb meaning to put a border on; to touch at the edge or boundary; to lie on the border; and, to approach the nature of a specified thing.

Pronunciation of Border: Border is pronounced bore-der. Border rhymes with order, disorder, and recorder. The word border is also a homophone to the word boarder.

How to Use Border in a Sentence

What does border mean? Border can function as both a verb and a noun. As a transitive verb, border can mean: to lie on or adjacent to the border/boundary of, or, to put a border on. 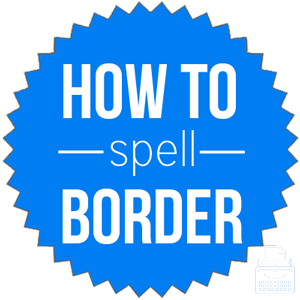 The intransitive verb can mean to lie adjacent to another, or, to be almost like another in character.

As a noun, border refers to a part that forms the outer edge; a decorative strip around the edge of something; a strip of ground where ornaments are placed or plants are planted; the line or frontier dividing political territories or geographic     regions.

Border was first used in the 14th century, according to Merriam-Webster’s

Border comes from Middle English bordure, from Old French bordeure, which is of Germanic origin and related to board.

There are several synonyms for border, but the right choice depends on the context and whether the word is used as a noun or verb.

As a noun meaning a line dividing two regions, the following words can be substituted:

For all other meanings of the noun, border, the following words can be substituted:

As a verb, the following words may be used to replace border:

Outside Examples of Border

Border can function as a verb and noun.