Also, beat refers to the act of overcoming or defeating an opponent. Beat may also refer to acting ahead of someone. Beat also means pulsate or throb, as a heart does.

As a noun, beat refers to the actual rhythm produced by beating something, such as a drum. It may also refer to a specific moment in time.

Finally, beat can describe someone or something as being tired or exhausted.

Pronunciation of Beat: Beat is pronounced beet. Beat rhymes with seat and neat. Beat and beet are homophones, which means they have the same pronunciation but different meanings and spellings.

How to Use Beat in a Sentence

What does beat mean? Beat can function as a noun, verb, and an adjective. Most commonly, beat is used as a verb meaning to physically abuse, hit, strike or pound someone or something. 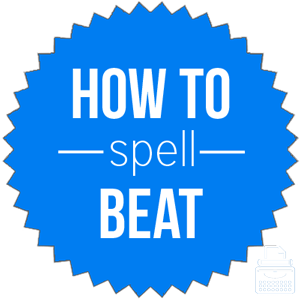 However, it has many meanings as a verb, including to win or overcome, or, defeat an enemy or opponent in a battle or a sport.

Additionally, as a verb, beat can refer to the pounding or striking of an instrument to make a rhythm.

Beat also refers to the action of mixing by stirring something swiftly, as in baking or cooking.

As an adjective, beat is used to describe someone or something that is worn out or exhausted.

As a noun, beat refers to the sound made by repeatedly striking something in a specific pattern.

Phrases & Idioms That Use Beat

Beat around the bush: to explain something or confront someone indirectly so as to avoid offending, hurting, or angering someone.

Beat it: to leave quickly; an expression used to rudely tell someone to leave immediately.

Beat up on: to physically attack someone or something, usually on a regular basis; to verbally attack or criticize.

Beat was first used prior to the 12th century, according to Merriam-Webster’s.

There are many synonyms from which to choose, however, it’s important to select the appropriate word for the specific context and meaning.

In terms of beat as a verb meaning to strike or hit repeatedly, the following words can be substituted:

When using beat to describe the act of winning or being victorious over, the following synonyms can be used:

The adjective form of beat also has several synonyms which can be substituted:

When used as a noun, the following words can replace beat, however, it’s important to select the one that is most fitting of the context:

Outside Examples of Beat

Beat can function as a noun, verb, and an adjective.