Definition of Argument: An argument is the act or process of arguing, discussing, or reasoning. When people disagree, they typically argue and state their supporting point(s), or argument, for their side. An individual might present an argument in order to convince or dissuade an audience of something.

How to Use Argument in a Sentence

What does argument mean? Argument is a noun. An argument occurs when people disagree and discuss their opinions.

An argument is usually an angry or heated discussion between individuals with opposing views or points. 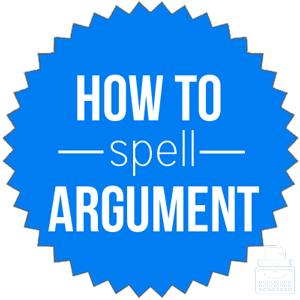 An argument is also a type of reasoning or fact or statement used as evidence to demonstrate a truth or falsehood. One might present an argument as to why something should or should not occur.

According to Merriam-Webster’s, the word argument was first used in the 14th century.

Argument comes from Middle English from Anglo-French. Ultimately, it originates from Latin, argumentum, from arguere, meaning to make clear.

There are several synonyms for argument, but some words should only be used to replace it if the context and meaning are the same.

For argument as an angry or noisy discussion of differing views, the following words can be substituted:

When referring to a statement made to explain one’s side or belief, the following words can be substituted:

The following synonyms can be used to replace argument when the meaning is an exchange of views for the purpose of deciding an issue or exploring a particular subject:

Finally, to refer to an idea or opinion that is presented in a discussion or debate, the following words can be substituted for argument:

Outside Examples of Argument

Argument is a noun with a few different but closely related meanings.

In most cases, an argument is an angry or passionate discussion between people with opposing views. It may also refer to one’s belief or reason for a specific decision, action, or conclusion.