Definition of Aggressive: Aggressive describes someone or something that exhibits aggression, or physical violence. It may also describe one who is marked by obtrusive energy and self-assertiveness. Aggressive also describes anyone or anything that is strong or emphatic in effect or intent, that grows, develops, or spreads rapidly, or that is more severe, intensive, or comprehensive than usual in dosage or extent.

Pronunciation of Aggressive: Aggressive is pronounced a-gress-iv. In this case, the “-e” on the end does not make the “i” long.

How to Use Aggressive in a Sentence

What does aggressive mean? Aggressive is an adjective. It describes anyone or anything that is either physically violent, verbally abusive, or stronger, more intense, or more severe than usual or than necessary.

Aggressive is used to describe human behavior and actions, as well as types of medical treatment, approaches to sales and other forms of persuasion, as well as human and animal personalities, and other inanimate things like colors and flavors. 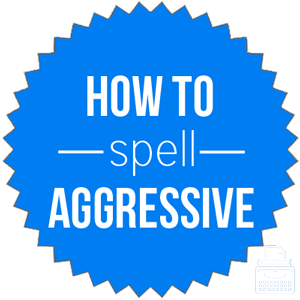 When someone or something acts or does something in an aggressive way, the adverb aggressively is used. It is formed by adding “-ly” to the end of aggressive.

Aggressive was first used in the year 1716, according to Merriam-Webster’s.

There are several synonyms for aggressive, but it is important to select the word that is most similar to the specific context or meaning.

In terms of being or showing boldness in pursuing a goal, the following synonyms can replace aggressive:

Aggressive, as it refers to the display or feeling of eagerness to fight, can be substituted by the following synonyms:

The following words are synonymous with aggressive when used to refer to something that is marked by or uttered with forcefulness:

Outside Examples of Aggressive

Aggressive is an adjective that describes people or things as being overly forceful, violent, eager to fight, strong, intense or more severe than is normal, expected, or necessary.