You may think that Christmastime is already stressful enough—with the decorating, the shopping, the traveling, the cooking, the visiting of friends and family, the stress of starting a new year, and the list goes on.

Let’s be honest, the most wonderful time of the year can take a lot out of you if you let it.

And, as Christmas nears each and every year, editors all across the country bear a different kind of stress. And that is, how do you spell Santa Claus(e)?

I’m not certain, but it would make sense that a prerequisite for being on the “nice” list is knowing how to spell Santa’s full name, so just to be sure that each and every one of you can wind up getting presents this year, let’s take a look.

In this post, I will compare Santa Clause vs. Santa Claus. I will outline the appropriate time to use each spelling with examples and explanations.

Plus, at the end of the post, I will show you a helpful trick to remember the difference.

When to Use Santa Clause 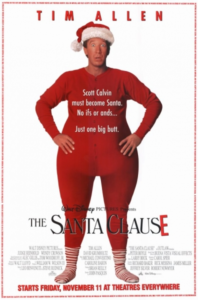 The Santa Clause is a 1994 Christmas movie where Scott Calvin, portrayed by Tim Allen, inherits the responsibilities of Santa Claus by agreeing to a contract known as the “Santa Clause.”

In the movie, Scott Calvin startles Santa and accidentally causes him to fall from his roof when delivering presents on Christmas Eve. Santa then vanishes leaving behind his suit, which Calvin’s son, Charlie, convinces him to put on in order to finish Santa’s work for the night.

Unbeknownst to Calvin, upon putting on the Santa suit and entering the sleigh, he had agreed to the “Santa Clause,” which gave him the full responsibilities of becoming the new Santa.

As you can see, the “Santa Clause” is a clever play on words to refer to the “clausical contract” that Calvin inherited by putting on the suit of Santa Claus.

When to Use Santa Claus

Now that we have the confusing Santa Clause out of the way, we can focus on the main attraction: the big bearded man himself.

Although he has many names, Saint Nicholas, Saint Nick, Kris Kringle, Father Christmas, Santa, Santy, etc., Santa Clause is not one of them. That is a title reserved solely for the Christmas movie.

Santa Claus, the man in the big red coat who rides from home to home, does not have an E at the end of this name.

When you aren’t sure about the spelling of Santa Claus, just look at the word clause itself. A clause—so spelled—is a grammatical term, consisting of a subject and a predicate. You find clauses in laws, contracts, and other written agreements, but not with Santa.

Santa doesn’t need to have a written contract with you; he simply needs you to be a good person to your fellow man.

Is it Santa Clause or Santa Claus? While both of these spellings are Christmas related, only one is the proper spelling of Saint Nick’s full name.