Home » Goblin vs. Ghoul – What is the Difference?

Most people associate goblins and ghouls with Halloween. On this day, all things scary and frightening roam freely in the streets—and usually collect candy from your doorstep.

But what exactly is the difference between these two creatures? Is there one?

What is the Difference Between a Goblin and a Ghoul?

In many modern contexts, especially movies and television, the names of these creatures are blurred together.

While there are some overlapping features between them, there are also some limiting ones. The terms themselves also have separate origins.

Let’s take a look at these fantasy characters.

What is a Goblin?

A goblin is a creature from European folklore, first appearing in stories from the Middle Ages. Goblins are ascribed various attributes, but, generally speaking, they are said to be mischievous, ugly, dwarflike creatures.

A goblin is a type of living creature, which separates it from a ghoul, as ghouls are said to be apparitions of evil spirits, thus non-living beings. Goblins are characterized under the dwarf family and are ugly creatures that are mischievous—even outright evil. They are usually greedy for jewelry and gold, and they live in the woodland or underground in caves.

A goblin can also have magical abilities, similar to a fairy or demon.

Origin of goblin: There are a few ideas where this term came from. We know it first appeared in the Middle Ages from the Old French gobelin. From there, it is unclear whether it comes from the German Kobold or the Greek kobalos, which means “mischievous goblin.”

In Medieval Latin, however, Gobelinus appears as a name of a mischievous spirit that was said to haunt Évreux in northern France in the 12th century.

How do you spell goblin? While English-speaking countries have almost universally standardized around the spelling goblin, variations and other spellings include gobblin, gobeline, gobling, goblyn, and gobbelin.

What is a Ghoul?

A ghoul is a type of apparition or evil spirit that stems from ancient Arabian folklore.

As ancient folklore stated, ghouls lived in burial grounds where they would rob the bodies from the graves in order to consume their flesh.

Ghouls can also shape shift and disguise themselves as animals or other living beings. A common example of this is the desert dwelling ghoul, which shape shifts into the hyena to lure unwary people into the desert in order to devour them. After killing its prey, the ghoul commonly takes the form of its most recent victim.

This type of association with the dead and spirit world is one that separates ghouls from goblins. As I mentioned before, goblins are living creatures. Ghouls, on the other hand, are evil spirits that can, in some cases, inhabit animals or humans.

Ghouls aren’t necessarily grotesquely ugly like a goblin, either.

Ghouls can sometimes be under the control of mages or vampires, who might use the ghoul to inhabit other living creatures to do their bidding.

Origin of ghoul: Ghoul comes from the Arabic غول ghūl, which comes from غال ghala, meaning, “to seize.” According to some Islamic scholars, ghoul is etymologically related to the word galla, which is the name of a class of Underworld demons from Sumerian and Akkadian mythology. 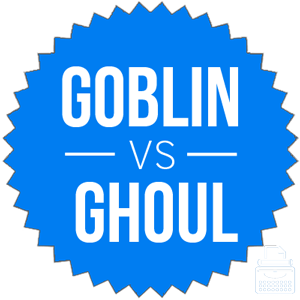 While neither creature is considered “good,” ghouls seem to be more evil than goblins.

Some goblins are evil; others are simply mischievous. All ghouls are considered evil, and they prey on the dead or devour their living victims to inhabit their bodies. Apparently, a goblin’s favorite pastime is stealing jewelry and gold.