Home » Flutist or Flautist – Which is Correct?

Many aspiring young musicians set out to play the flute. Those fortunate enough to have access to one of these instruments might start practicing at an early age, taking lessons from an established teacher and later joining a school band. Those players who remain committed to their art might go on to join community orchestras or become professional musicians in adult life.

Flute players are not rare, which is why it is strange that such confusion surrounds the word for a person who plays the flute. What is a flute player called? Is this person a flutist, or a flautist?

What is the Difference Between Flutist and Flautist?

In this post, I will compare flutist vs. flautist. I will use each of these words in at least one example sentence, so you can see how they appear in context.

Plus, I will show you a helpful memory tool that makes choosing either flutist or flautist much easier in the heat of the moment.

When to Use Flutist

What does flutist mean? Flutist is a noun. A flutist is someone who plays a flute, or an elongated wind instrument with holes for making notes. Most symphony orchestras and concert bands contain flutists—along with the British progressive rock band Jethro Tull.

Flutist is the older term and was first recorded in English at the dawn of the 17th century.

When to Use Flautist 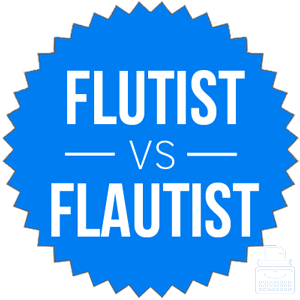 What does flautist mean? Flautist is a different way to spell the same word, but it is used chiefly in British English.

According to Bryan Garner, flautist is the predominant spelling in British English, but only because British writers changed flutist to form a distinctly British spelling of the word.

It would thus be more accurate to say that the British progressive rock band Jethro Tull features a flautist, rather than a flutist. Additionally, Garner mentioned a common joke among flute players that only second-rate flutists prefer to be called flautists.

The following charts show the relative usage of flautist vs. flutist in American and British English, respectively.

According to Bryan Garner, British writers began revising flutist to flautist in order to make the word a Gallicism.

Also, it should be noted that these charts should not be considered scientific or exhaustive in their scope, since they only look at books published in English since 1800. Despite this fact, they still provide a clear picture of a long-term usage trend.

How to Pronounce Flutist and Flautist

Given their different spellings, it’s no surprise that each of these words have their own pronunciation, too.

What Do You Call Someone Who Plays the Flute?

Flautist is the preferred term in British English, and flutist in American English, so the word you choose should depend on the audience for whom you write.

Since flautist contains the letter A, like the city of Aberdeen in the United Kingdom, you can always remember to use this word with British audiences.

Is it flautist or flutist? Flautist and flutist are two spellings of a noun that refers to a person who plays the flute.

Other than a difference in regional use, the two words are interchangeable.