Have you ever wondered about the differences between public transportation and public displays of affection?

Chances are good that you haven’t because those two things are not related to each other. The words buses and busses are almost identical, though, and they each describe one of those actions.

Thus, if you want to describe your morning commute accurately to a coworker or classmate, you will need to know the difference between these words.

What is the Difference Between Buses and Busses?

In this post, I will compare buses vs. busses. I will use each of these words in an example sentence, so you can see them in context.

Plus, I will show you a memory trick that will help you decide whether to use buses or busses in your own writing.

When to Use Buses

What does buses mean? Buses can be a noun or a verb.

As a noun, buses is the plural of the word bus, which is a vehicle for transporting groups of people. In information technology, it can also mean a connection hub, like in the phrase universal serial bus.

As a verb, buses is the third person singular present tense form of bus, which means to travel by bus or to transport people by bus. In food service, it can also mean to clear a table of dishes.

When to Use Busses

What does busses mean? Busses is the third person singular present tense conjugation of the verb buss, which means to kiss. It can also be the plural of the noun buss, where it means more than one kiss.

Today, busses is no longer common in these contexts. If a writer needed to describe kisses or kissing, he or she would simply use kiss.

That said, busses should not be used in the context of transportation. Most of your audience won’t know the difference, but you will give careful readers the wrong impression.

As The AP Stylebook entries on these two words state, 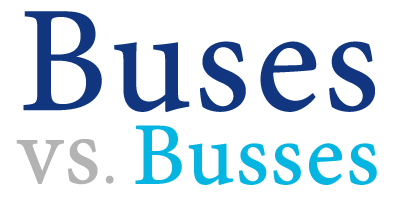 Now, let’s go over a trick to remember busses vs. buses.

You should always use buses in the context of transportation. Busses is a misspelling in these situations. And in most cases, kiss is a better choice than buss.

Remember, buses does not double the S like kisses. Since both buss and kiss contain a double S, you will always know that these words are synonyms.

What is the plural of bus?

If you are referring to kisses, the plural is busses.