Home » Emigrate vs. Immigrate: What Are the Differences Between Immigration and Emigration?

When To Use Migrate

Before we get into the difference between “immigrate” and “emigrate,” we should look at the word “migrate.” To migrate is to move from one country or region and settle in another. Migrate is an umbrella term under which both “immigrate” and “emigrate” fall. When it applies to people, it generally means a permanent move but can also mean a temporary relocation. For example,

When “migrate” applies to animals such as birds, it generally means a seasonal or temporary change in habitat. For example,

When To Use Immigrate

To immigrate is to enter and settle in a foreign country, leaving a past home. “Immigrate” implies a permanent move and applies only to people. For example,

There is one main feature that distinguishes “immigrate” from “migrate.” “Immigrate” means an individual or group of people have moved into a new, foreign country. “Migrate” does not require moving into foreign land; it just implies moving. “Immigrate” usually refers to the crossing of a political boundary (moving into a new country) where “migrate” can just be moving to a new region. For instance,

In this example, Michiganders aren’t moving to a foreign land, but they are migrating south for the winter.

When To Use Emigrate

To emigrate is to leave one country or region to settle in another. “Emigrate” implies a permanent move and only applies to people. For example,

In this example, my grandparents are immigrants here in the United States, but back in Norway, they are emigrants. The graphic below does a good job illustrating the difference. 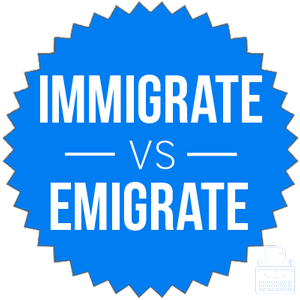 There is a good trick to remember the differences between “immigrate” and “emigrate.” The prefix e- (or ex-) usually means “out of” or “from.” The prefix im- (or in-) often means “in” or “into.”

Or to put it even more simply,